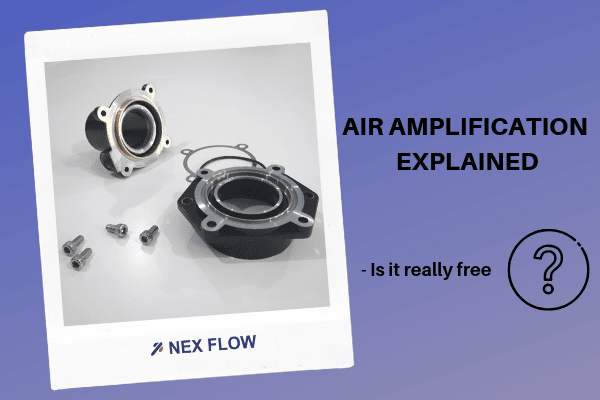 They work using the Coanda effect, which essentially is an effect in which a fluid (liquid or gas) clings to a surface as it flows in a laminar flow.  You can see this effect by turning on the water tap in your kitchen at a low level, so the water flow is smooth. Put your finger just touching the flow, and it will bend the water flow as it slings to your finger.  The same thing occurs with a compressed gas like air.

As this air bends, it creates a vacuum behind it drawing in surrounding atmospheric air. This “converts” the pressure that is normally lost as pressure drops and noise into the flow. This is important. Several things occur as this additional mass flow is drawn in and mixed with the compressed air.

This means that whatever blow-off energy is required, it can perform that operation at a greater distance from the exit of the air than if compared to an open pipe or tube. And, of course, because lost energy is recovered, the noise levels drop. So when we state that air amplification is free, it is quite true, but with the caveat that overall force will be lower, but velocity and flow will both be much higher, all due to the extended laminar flow.

If air is blown with just an open pipe or tube, the exit creates a great deal of turbulence resulting in energy loss and high noise levels. This means that the force may be quite high near the exit, but it will dissipate quickly as you move away from the air exit.

There are some situations where high pressure is required. In those situations, an air amplification nozzle or device may not meet that force, such as removing heavy mud baked onto a surface or breaking off scale waste from metal.  But the pipe used has to be close to the surface. However, except for those situations, air amplification technology certainly can be used instead, as the vast majority of applications where compressed air is used do not need the full high-pressure force of an airline.

One suggestion to reduce energy and noise is simply to reduce air pressure for blow-off and even cooling applications. After all, a 20% reduction in compressed air pressure will reduce the compressed air energy by 10%. If you reduce the pressure to 30 pounds from 80 pounds per square inch, that would yield a 25% reduction in energy.  Noise will go down somewhat, but you will still have a great deal of turbulence at the air exit, and you will not get the “distance” for effectiveness that you would with an air amplifier.

But, even an air amplifying air nozzle will get anywhere from 30% to 40% or more energy reduction with the equivalent force, depending on the design of the air nozzle.  For example, older cone-shaped air nozzle designs will reduce energy by 30% and create very high flow and velocity, which is especially ideal for cooling applications. The Nex Flow Air mag design reduces energy by over 40% and works with a powerful force and high flow, and high velocity with the laminar flow at a very long distance, as well as noise reduction.

The argument for that extra “free” energy from air amplification is therefore very compelling. 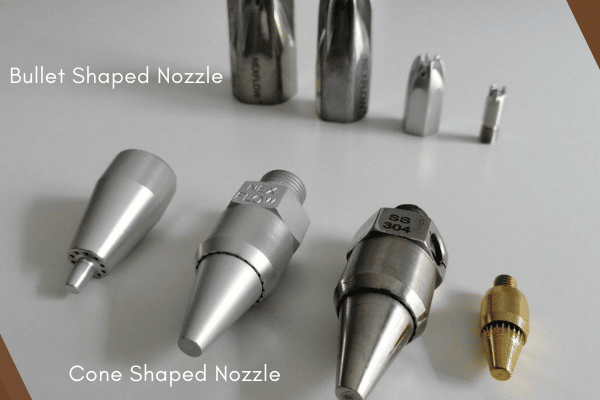 As was hinted at above, it is not just the flow profile and Coanda “angles” which affect performance.  It is the internal design of an air amplifier and how the compressed air behaves internally that is also important.  Minimizing internal turbulence is a major consideration in design. For example, you can take five different cone-shaped air nozzles from different manufacturers, test them side by side, and their performance and efficiency can vary by a wide margin.

In this case, efficiency can be defined as the force produced at a set distance divided by air consumption. There is a design called a Laval nozzle, for example, that was developed to produce less noise and improve energy. However, the noise level improvement is not significantly noticed due to the noise frequencies obtained, and the distance of effectiveness appears to be limited because, to make this design work, the efficient exit of the force-producing airflow has to be contained by a rather inefficient series of air flows from slots around the Laval opening, offsetting any other improvements.

The Coanda design combined with proper internal design appears to be the optimum methodology in air amplifier design.

Air jets are another example where the Coanda design makes a big difference.  Air Movers or large annual Air Amplifiers, if very small, are called Air Jets.  Most manufacturers of Air Jets have one Coanda angle to direct the air exiting the annual plenum.  Nex Flow Air Jets have several specially designed Coanda angles and can produce the same high level of force and flow with 25% less energy and lower noise levels.

Large annual Air Amplifiers also have efficiency variations among different manufacturers because of internal and external design differences.   A somewhat abused term that often comes up with annular Air Amplifiers is “amplification ratio”. One should be very wary of, frankly, ridiculous claims of high amplification ratios. For example, for annular air amplifiers, the maximum practical ratio you can achieve is about 20 to 1.

This means that if you measure the flow at the exit of an annular Air Amplifier, the flow rate would be 20 times the inlet air.  For several reasons, some producers are claiming as much as 25 times, which is dubious. One reason is that when surrounding air is entrained with the moving compressed air exiting the opening in the Air Amplifier, “still” outside air will slow down the flow velocity at the outlet.

If you entrain, for example, 25 times the compressed air consumed, the velocity would be 20% less than it would be if the figure were only 20 times. That is significant because you need adequate velocity for both blow-off and cooling.  Secondly, the explanations one can read on how this extra air amplification occurs should be challenged as defying physics.

In comparison, Nex Flow has done with such products, the results were a lower air amplification and even lower overall performance because of internal design and extra pressure losses internal to those systems. Anyone can always compare a Nex Flow Air Amplifier to another and see the difference. Nex Flow fixed Air Amplifiers, for example, claim 16 times amplification with a compressed air supply at 80 PSIG (5.5 bar) pressure and at standard atmospheric conditions.

These figures are averages because air amplification will go up (as much as 20) at lower inlet air pressure and if the atmospheric air is warm. 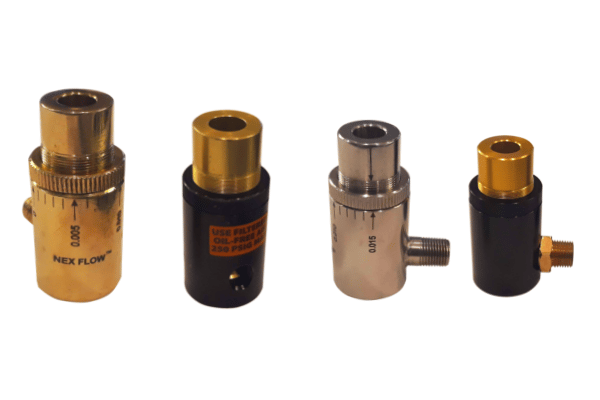 Air knives are another area where figures need to be considered between manufacturers.  Air knives are linear air amplifiers. There are two styles of compressed air-operated air knives on the market.  The older style uses several Coanda angles where the air exits a gap, normally maintained using a shim to set the gap, and is bent 90 degrees.

This gives a decent air amplification ratio of about 10:1 right at the exit and 25:1 to 30:1 measured 6 inches away (due to downstream air entrainment) depending on internal design effects.  Some manufacturers have air knives with two gaps and claim as much of a 50:1 amplification ratio (two gaps, so they double the ratio) which makes dubious sense. You don’t double the air out and the ratio – it does not make sense to have it “additive.”

So again, it is good to challenge claims that may seem to make sense. Another thing to consider, especially with air knives, is real efficiency. Efficiency, as before, is the force measured at a distance per unit of air consumption, for example, force/SCFM. Internal design can make a difference.  Newer style air knives have the airflow exiting straight out of the gap with air entrainment from special angles on each side of the air gap.

This design will provide 25% more force/SCFM than the older style versions, where the air bends 90 degrees. Hence their popularity has largely displaced the older style, but there are still some applications where the old style is useful.  But even among the new style, design differences can affect performance and efficiency.

Nex Flow, for example, with their Silent X-Stream Air Blade air knife has a different internal design than two other significant air knife manufacturers and has about the same force/SCFM as them at a given pressure except for one thing… Nex Flow produces the same SCFM and same force at 60 PSIG, while the other units get equal performance and efficiency at 80 PSIG.  That means a Nex Flow air knife needs less pressure to do the same job as the others.

It was quite humorous when one manufacturer claimed in a blog that our air knives used so much more air at a given pressure, but without mentioning the force produced, a poorly written defense of the fact that they are less efficient.

If the Nex Flow unit replaced the competitive unit, the air pressure could be reduced by 20 PSIG. As mentioned earlier in this article, that pressure reduction represents a 10% energy saving. So when comparing products, it is very important to look at all the facts. One of the other aspects of the Nex Flow Silent X-stream Air Blade air knife that dramatically illustrates efficiency is how quiet it is, even compared to other designs of its type.

One other point to mention is the flow profile.  When an air nozzle, air jet, air amplifier, or air knife produces the amplified airflow, the profile will affect the force per square inch or square millimeter.  This is particularly important in air nozzles. You need to decide on the minimum force required and the surface area you need to address.

This is especially important if putting together a row of nozzles for blow-off.  You want the flow profiles to cover the required area without missing any spots or overlapping. A wider profile produces less force per unit area than a more focused air nozzle.

Air amplification is free, but among different designs, it can be more or less free than others.   Besides reducing energy and noise, it is important to remember that air-amplifying products work at a greater distance than just open pipe or tubing.

The velocity produced by air amplification products is very important when used for cooling. The high velocity combined with the high flow is important, but they are mutually dependent.  The more flow, the less velocity. The less velocity, the more flow. If the velocity is too low, you will not get the same cooling effect. Think of driving a car on a hot day with the window down.

It’s the same volume of air coming in to cool you, but the velocity from driving fast helps cool you more. But most certainly, air-amplifying products reduce energy use, and noise levels and make factory operations using compressed air more environmentally friendly. 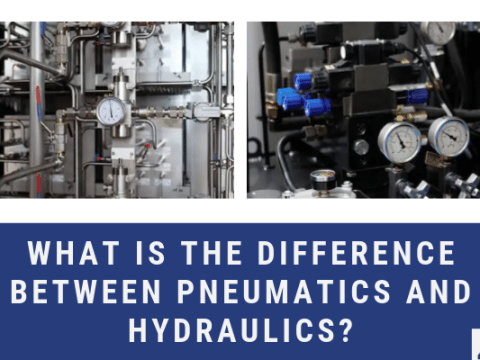 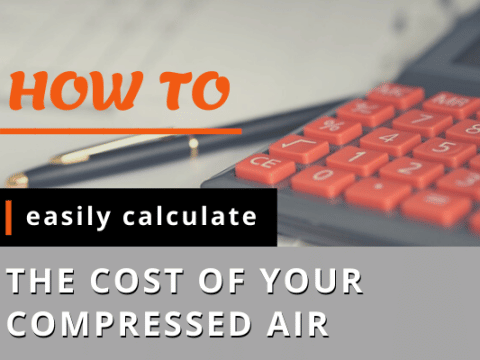 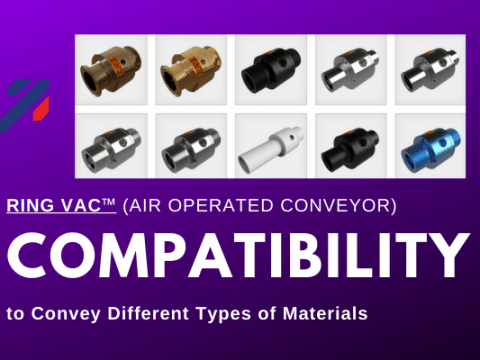 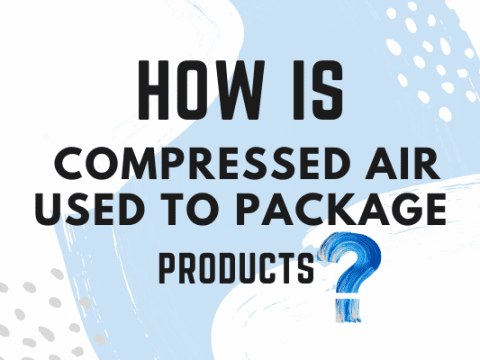 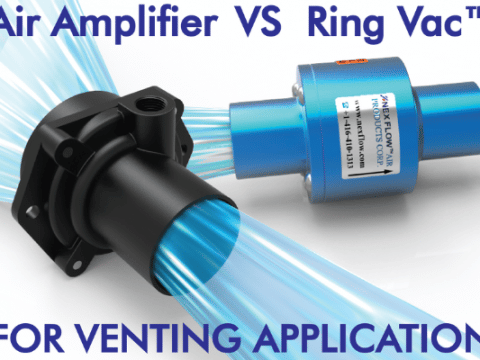